I’ve been reflecting on my entertainment engagements of the year, and I must confess that I couldn’t have asked for anything more. Normally I get to one or two events over the course of a year, this year has however exceeded itself (or I have exceeded myself, or I’ve exceeded myself and my own expectations, or something to that effect…). With lots of planning (read Nana naps and down time, scheduled sleep time, bed time and reading time etc) I’ve managed to attend the concerts and shows of my most favourite entertainers, and make outfits which will continue to live on with the memories created.

Here are some of the things I’ve been up to in the past 12 months that have started with a ticket and ended with a dress!

I’ve seen her twice before and am continually amazed at the talent she exhibits playing live. She plays the piano and organ simultaneously with the same confidence that I’m able to use two screens at work, the former obviously requiring significant talent, the later not as much. Tori’s first album Under The Pink moved me away from pop music (not that there’s anything wrong with that, love you Taylor Swift and Beyonce) and into the realms of angsty, angry, thought provoking yet often poignant female music. I have all her albums. I know all her songs. For almost 20 years I have followed her prolific music career and I know which album suits my mood on any given day. In a non stalker type kind of way.

This time she played at the Palais Theatre in St Kilda, which is soaked with the memories of so many wonderful musicians and I imagine copious amounts of beer. I hope that it survives current council planning.

Unrepentant Selfie at the Palais

So down to the nitty gritty. I was watching some of her old film clips for inspiration of what to make, and whilst I was originally leaning towards a Holly jumpsuit (such an 80’s girl) the fabric I purchased didn’t have the right amount of drape. I came across the clip for God which is one of my favourite songs, and thought that the dress over pants was the way to go. And then I found this linen from my recent online fabric splurge from The Drapery in Adelaide. I found love.

I have worked with inexpensive linen before with screen printing and tea towels but nothing compares to this gorgeous beautiful linen. It’s soft, presses beautifully, and has the most gorgeous drape. It also comes in a number of colours, of which I may have indulged in several.

Given my recent favour for the Anna dress, I thought I’d go with the Elisalex bodice to mix things up and add the Anna skirt. I knew the bodice and skirt seams would only match at the sides and the back and didn’t have the energy to redraft the skirt pattern to match the darts. So black velvet ribbon and this gorgeous velvet flower from L’ucello’s served as a distraction from the lines, which in reality nobody notices anyway.

Wiggle Dance of the Back

I also played around with the Ultimate Trouser pattern as I wanted 3/4 pants to wear underneath that wouldn’t add any bulk around the waist or hips, made in a matching linen. I made four toiles (muslins) to get the fit right which is a record of persistence for me, and I’m very happy with the result. I think that the sizing comes up smaller that what is shown on the pattern. That, or my tape measure was not being very generous that day, so I ended up going up a size, sewing a 1cm seam except for the centre front and back which I kept at 1.5cm. Next time I will take another cm out of each of the back darts to accommodate my generous derriere and small waist. Then I will have the perfect pattern for my pants/dress combination that is something of a uniform for me. I don’t think I will be wearing them with anything less than a tunic top as those bits are best kept hidden.

You Can Kind of See the Pants…

I also wore my black birdcage veil again which was part of the original NIN ensemble. It makes me feel a little black widow which I quite like.

It was an amazing concert. I couldn’t have asked for a more perfect set list. I cried so many tears, having forgotten how much of an impact her music has had on me over the years and the link that it has with my darling Boo in Berlin. 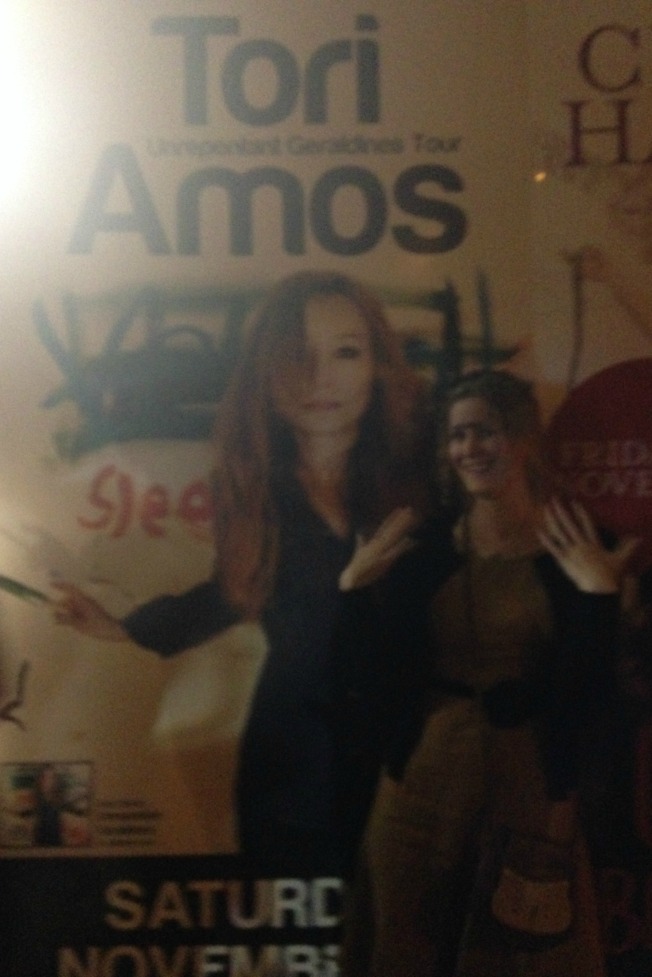 Just. So. Emotional. And Cold and Wet.

Boo, she played Pretty Good Year. I SOBBED!!!! I could hear your voice along with hers.

Special thanks goes to my Tash who didn’t laugh when I ordered a Pina Colada at the bar before, sat next next to me through a very emotional concert holding my hand when overwhelmed with tears and escorted me safely home in the rain.